Decide! Once and for All!

It is a well-known fact among historians “that Revolutionary American political leaders widely admired and made frequent reference to the works of Charles Louis de Secondat, Baron de Montesquieu, and especially to his The Spirit of the Laws….” [1] Montesquieu’s name is mentioned in the Federalist Papers “no less than 12 times,” [2] and his chief influence was on the doctrine of separation of powers.

We still maintain our three branches of government, although the presidency has certainly become more influential than originally conceived, and that due to a combination of congressional political cowardice and partisanship. But there is one lesson that Montesquieu does not seem to have successfully imparted, although it should have been as obvious as the necessity of dividing governmental powers among separate bodies. 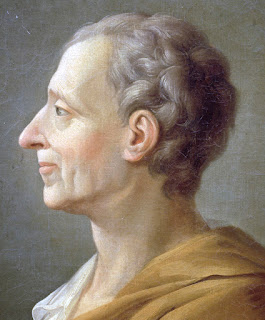 Now it may be characterized as a dirty little secret that the Founding Fathers envisioned an aristocratic republic, rather than a democratic one. There were everywhere gender and property qualifications to vote, not to mention slaves. But we have, presumably, moved beyond the original concept. We now have what is supposed to be universal suffrage, as is evidenced by the efforts of some partisans as of late to throw difficulties in the way of voting rather than the outright prohibitions that they would doubtlessly prefer.


We now have an attempt at what Montesquieu would call a democracy. So much has this become the civic goal that the word “democracy” has achieved a sacrosanct status. A policy proposal attacked as antidemocratic must be defended as being consistent with democracy. One never hears a politician say in defending his or her position, “To hell with democracy!”

This is now, and, of course, nowadays political terminology is largely vacuous. But if anyone wants to tout democracy as the preferred system of government for our country, he should be called to the bar of one of America’s principal instructors on politics to consult him as to what a real democracy requires. In chapter V of Book V of The Spirit of the Laws, entitled “In what Manner the Laws establish Equality in a Democracy,” he says,

“SOME ancient legislators, as Lycurgus and Romulus, made an equal division of lands. A settlement of this kind can never take place but upon the foundation of a new republic, or when the old one is so corrupt, and the minds of the people are so disposed, that the poor think themselves obliged to demand, and the rich obliged to consent to, a remedy of this nature.

“If the legislator, in making a division of this kind, does not enact laws, at the same time, to support it, he forms only a temporary constitution; inequality will break in where the laws have not precluded it, and the republic will be utterly undone…. 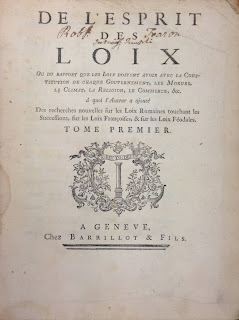 “Though real equality be the very soul of a democracy, it is so difficult to establish, that an extreme exactness in this respect would not be always convenient. Sufficient it is to establish a census, which should reduce or fix the differences to a certain point: it is afterwards the business of particular laws to level, as it were, the inequalities, by the duties laid upon the rich, and by the ease afforded to the poor. It is moderate riches alone that can give or suffer this sort of compensations; for, as to men of over-grown estates, every thing which does not contribute to advance their power and honour is considered by them as an injury.”


Human nature hasn’t changed much since Montesquieu’s day, neither has what a true democracy requires. If your democracy is characterized by vast differences in wealth, it is either not really a democracy or its days are nearing their end.

We already know, or should know, where we are. A 2014 study shows “that economic elites and organized groups representing business interests have substantial independent impacts on U.S. government policy, while average citizens and mass-based interest groups have little or no independent influence.” [4] Universal suffrage notwithstanding, the United States is not a democracy.

There are misguided acclamations of that fact to be heard in defense of federalism or the Electoral College from those who say that we are a “republic,” not a “democracy.” But neither federalism nor the Electoral College have anything to do with that. Montesquieu would tell us that if we are a republic, we are either a democracy or an aristocracy. And since we are clearly not a democracy, there is only one other option. True, we don’t have a hereditary aristocracy, not by force of law in any event. But it is undeniable that we live in a country ruled by the wealthy.


So, we must decide whether we want to have an aristocracy or a democracy. If we want an aristocracy, we don’t have to do anything; we’ve already arrived. I would only caution that there is no evidence that riches have any correspondence with either virtue or wisdom. But if we want a democracy, we’re going to have to even out the wealth people have in the United States.

To accomplish that we will have to prevent anyone from becoming extremely rich or extremely poor. We will need both a minimum and a maximum income, and the most straightforward way to do that is through a steep progressive income tax.

There may be other ways to accomplish it. But we should decide, once and for all, whether we want to have a democracy or not. That can’t be done if some people live in poverty and others are obscenely wealthy, the way it is now.