Facts Are for Juries

In May of 2010, a neighbor of one Amy Hughes “called 911 to report that a woman was hacking a tree with a kitchen knife.” Officer Andrew Kisela, a police officer in Tucson, Arizona, “and another police officer, Alex Garcia, heard about the report over the radio in their patrol car and responded. A few minutes later the person who had called 911 flagged down the officers; gave them a description of the woman with the knife; and told them the woman had been acting erratically. About the same time, a third police officer, Lindsay Kunz, arrived on her bicycle.” [1]


Officer “Garcia spotted a woman, later identified as Sharon Chadwick, standing next to a car in the driveway of a nearby house.” There was a “chain-link fence with a locked gate” separating Ms. “Chadwick from the officers. The officers then saw another woman…emerge from the house carrying a large knife at her side.” The woman, who was later identified as Ms. Hughes, “matched the description of the woman who had been seen hacking a tree. Hughes walked toward Chadwick and stopped no more than six feet from her.”

At this point, all “three officers drew their guns.” They ordered Ms. Hughes to drop the knife at least twice. Ms. Chadwick told both Ms. Hughes and the officers to “take it easy.” Ms. “Hughes appeared calm, but she did not acknowledge the officers’ presence or drop the knife. The top bar of the chain-link fence” was blocking Officer “Kisela’s line of fire, so he dropped to the ground and shot Hughes four times through the fence.” The officers then “jumped the fence, handcuffed Hughes, and called paramedics, who transported her to a hospital. There she was treated for non-life-threatening injuries. Less than a minute had transpired from the moment the officers saw Chadwick to the moment Kisela fired shots.”


Ms. Hughes sued Officer Kisela in federal district court, alleging that Kisela had unconstitutionally used excessive force (intentional police shootings are considered “seizures” under the 4th Amendment [2]), and the case eventually made its way to the Supreme Court, which decided the case on April 2nd. The facts that your humble servant has set forth above were the Court majority’s rendition of the facts as viewed in the light most favorable to Ms. Hughes.


The reason why the Court had to consider the facts in that manner is that the appeal arose out of the district court’s granting of a “summary judgment” in favor of Officer Kisela, and summary judgments happen when a court decides that one party has no conceivable case in a civil matter, thereby making it pointless to bring in a jury. So an appellate court, in reviewing the lower court’s decision, will take a look at the facts from the losing party’s perspective to determine if that party had any case at all, which would make a summary judgment inappropriate.


Interestingly, the Supreme Court did not reach a decision on whether Officer Kisela’s actions violated the Fourth Amendment. Instead the Court decided that the facts were insufficient for Ms. Hughes to overcome Officer Kisela’s “qualified immunity.” 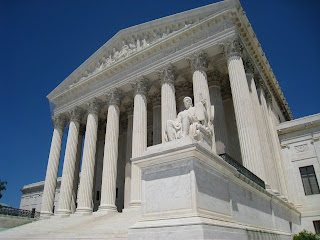 Police officers are entitled to qualified immunity against civil suits when their “’conduct does  not  violate  clearly  established  statutory  or  constitutional  rights  of  which  a  reasonable  person  would  have known.’” The “’focus  is  on  whether  the officer  had  fair  notice  that  her  conduct  was  unlawful….’” In other words, even if the officer actually violated someone’s constitutional rights, he is shielded from suit unless a reasonable person would have known he was doing so.” And a reasonable person knows that he is violating a constitutional right only if existing precedent has “’placed the statutory or constitutional question beyond debate.’” This means that qualified “’immunity  protects  all  but  the  plainly incompetent  or  those  who  knowingly  violate  the  law.’”


On these facts, the Court held that Officer Kisela was entitled to qualified immunity, and that, because of that, there was no conceivable way that Ms. Hughes could have a case against the officer, making proper the grant of summary judgment against her. The circumstances were not such, the Court held, where anyone in Officer Kisela’s shoes would know that he was unlawfully violating the constitutional rights of Ms. Hughes.


“Officer Andrew Kisela shot Amy Hughes while she was speaking with her roommate, Sharon Chadwick, outside of their home.  The record,  properly  construed  at  this  stage, shows  that  at  the  time  of  the  shooting:  Hughes  stood stationary  about  six  feet  away from  Chadwick,  appeared ‘composed  and  content,’…,  and  held  a  kitchen  knife  down  at  her  side with  the  blade  facing  away  from  Chadwick.   Hughes  was nowhere  near  the  officers,  had  committed  no  illegal  act, was  suspected  of  no  crime,  and  did  not  raise  the  knife in the  direction  of  Chadwick  or  anyone  else.    Faced  with these  facts,  the  two  other  responding  officers  held  their fire,  and  one  testified  that  he  ‘wanted  to  continue  trying verbal  command[s]  and  see  if  that  would  work.’…. But not Kisela.  He thought it necessary to use deadly force, and so, without giving a warning that he would open fire, he shot Hughes four times, leaving her seriously injured. If this account of Kisela’s conduct sounds unreasonable, that is because it was.  And yet, the Court today insulates that conduct from liability under the doctrine of qualified immunity, holding that Kisela violated no ‘clearly established’ law…. 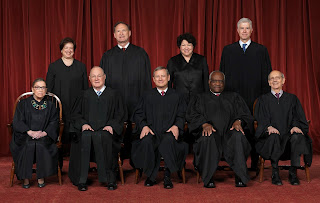 “I disagree.    Viewing the facts  in  the  light  most  favorable  to  Hughes,  as  the  Court must at summary judgment, a jury could find that Kisela violated  Hughes’  clearly  established  Fourth  Amendment rights  by  needlessly  resorting to  lethal  force.”


In cases of this kind, the view one takes too often depends on his or her political persuasion. That, of course, is not how legal decisions should be made. But your humble servant will submit that, as to liability, a fair-minded and objective person (to the extent there is such a beast) will find this a close case.


On the one hand, the officers were told of a woman with a knife acting in a manner that manifested mental illness. They came upon a woman matching her description, with a knife, within the proximity of Ms. Chadwick. Although Ms. Hughes was six feet away from Ms. Chadwick, with the knife pointed away from Ms. Chadwick, and appeared to be calm for the moment, there was no assurance that Ms. Hughes wouldn’t suddenly erupt into an act of violence. Six feet is not a long distance to run, and knives held to the side and pointed away can be raised. Ms. Hughes was told to drop the knife at least twice, but failed to do so. Plus, there was a chain-link fence between the officers and the two women. And while Officer Kisela was the only officer who fired his weapon, all three officers found the situation such that they drew their sidearms. Viewed in this way, the shooting was a clearly justified action in defense of Ms. Chadwick’s life.


On the other hand, Ms. Hughes never raised the knife, the knife was a kitchen knife, mental illness does not equal a danger of violence, Ms. Chadwick asked the officers (as well as Ms. Hughes) to “take it easy,” and Officer Kisela never gave a warning to Ms. Hughes before opening fire even though there was no indication of an immediate attack on Ms. Chadwick. From this perspective, it appears that Officer Kisela violated Ms. Hughes’s Fourth Amendment rights.


In other words, both sides had facts favorable to their side with which to go before a jury. But a grant of summary judgment takes a case away from a jury, and that should only happen when one side in a civil matter has no case at all.


Here the Supreme Court decided that not allowing a jury to hear the case was proper. But they did this based on a record. They didn’t watch the witnesses testify or observe their demeanor to assess credibility as would a jury, even though witness credibility could prove critical in a case like this, which involve close factual questions. It can only be concluded that the Court was mistaken in not allowing Ms. Hughes to take her case before a jury.
Posted by Jack Quirk at 5:03 PM