In recent posts, your humble servant has been attempting to sketch out some ideas on how to make better the lot of working people in the interest of enhancing the overall standard of living in this country, and do something about the historic income gap in the United States. What I have yet to mention is a solution that has been around for years, but is, in the U.S., underutilized.

The paucity of union representation in the United States has different explanations, which depend on whether the account is coming from the labor or management side of the divide. We do know that consulting employers on union avoidance is a multimillion-dollar industry. [2] 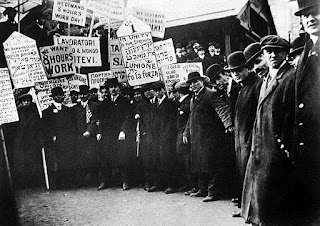 Yet, the fact remains, that employees represented by unions tend to be compensated better than those who have no union. The reason for this is plain. As Adam Smith himself observed, employers have a substantial advantage in bargaining power. Labor unions equalize the respective positions. If history is taken into account, the fact that unions better the standard of living for workers is beyond question.

So why do unions struggle? Why are so few workers organized when it would be in their economic interest to be so?

“During the Great Depression, a variety of laws were put in place to help workers. However,” after “World War II, the rising influence of labor unions was checked by a change in federal law that limited the power of these unions.” [3] Specifically, it was Labor Management Relations Act of 1947, better known as the Taft–Hartley Act.

“In understanding the Taft-Hartley Act, it is helpful to begin with the previously enacted federal labor legislation, the National Labor Relations Act of 1935, otherwise known as the Wagner Act. The Wagner Act was the first major piece of U.S. labor legislation and was known at the time as ‘Labor's Bill of Rights.’ The Wagner Act gave workers the right to organize, join labor unions, collectively bargain through representatives of their choosing, and strike. Under the Wagner Act, both ‘closed’ shops and ‘union’ shops were legally permitted. The Act also established the National Labor Relations Board.” (A “closed shop” is “a business in which the employer by agreement hires and retains only union members”. [4] A “union shop” is a “a unionized business in which the employer by agreement is free to hire nonmembers as well as members of the union but union membership within a specified time (as 30 days) is a condition of continued employment”.) [5]

“In the midterm elections of 1946, the Republicans gained control of the Senate and the House of Representatives for the first time since 1931. At that time, there was a growing fear of Communist infiltration of labor unions. That, coupled with the growth in membership and power of unions and several large-scale strikes, led to an increasingly anti-union climate. In 1947, Congress enacted the Labor Management Relations Act, otherwise known as the Taft-Hartley Act, over a veto from President Harry S. Truman. The Taft-Hartley Act repealed significant provisions of the Wagner Act. 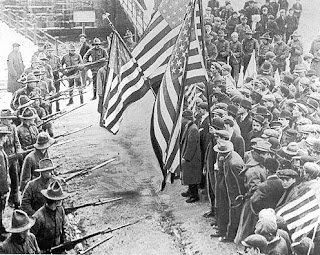 “The Taft-Hartley Act reserved the rights of labor unions to organize and bargain collectively, but also outlawed closed shops, giving workers the right to decline to join a union. It permitted union shops only if a majority of employees voted for it. It further gave the President the authority to appoint a board of inquiry to investigate labor disputes or ask the Attorney General for a federal injunction if it appears that a strike would imperil national health or safety. The Act also placed restrictions on political contributions by unions and required union officers to deny under oath any Communist affiliation.

“The Taft-Hartley Act also placed significant limitations on the union rights to strike and boycott. For example, it required unions to give 60 days’ advance notice of a strike. The Act also prohibited certain types of strikes and boycotts, including:

“· Sympathy strikes or boycotts: Whereby the workers not involved in a labor dispute strike or boycott in support of other striking or boycotting employees or unions

“· Jurisdictional strikes and boycotts: These are initiated against an employer as a result of a dispute with another union as to the right to perform certain work.

“The Taft-Hartley Act also expressly authorizes the states to pass laws prohibiting union shops or agency shops. Following the enactment of the Taft-Hartley Act, many states enacted such limitations, which are known as ‘right to work’ laws. Currently, 28 states have passed right to work legislation.” (An “agency shop” is “a shop in which the labor union serves as the bargaining agent for and receives dues from all employees in the bargaining unit regardless of union membership”.) [6] 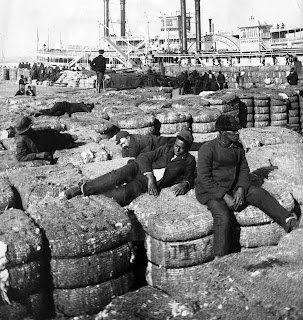 What the Taft-Hartley Act did, in essence, was prevent labor from acting in concert and nationwide. With sympathy strikes and boycotts prohibited, unions couldn’t engage in unified action against even the most egregious employers, leaving the employees involved to fight their battle alone. It prohibited unions from contracting with employers to hire only from their number, and, in states that chose to enact such legislation, prohibited them from contracting with employers to require union membership of those that are hired as a condition of employment.

A law of this kind should never be touted as in keeping with the free enterprise spirit. What sort of free enterprise prohibits entering into certain kinds of contracts? The law is, rather, intended to weaken union power, to weaken labor power. Where is the legislative effort to prevent employers from acting in nationwide concert to hold down wages?

For that matter, where is a law that prohibits employers from relocating their facilities to other countries to take advantage of cheap labor? This is another tactic that weakens the bargaining power of unions. Those employers who are able can threaten such a relocation if unions demand what the employers deem “too much,” or even if the employees try to unionize in the first place.

And so, unions are weak in the United States because the laws protecting workers are weak. Moreover, Taft-Hartley positively operates to prevent them from becoming more robust.

It appears, then, that unions will be stronger, and the standard of living for workers be greater, if Taft-Hartley is repealed. It will also be useful toward that end if penalties were imposed on American businesses that move their facilities to other countries to avail themselves of cheap labor.

None of this should be considered anti-business. Businesses obviously provide a necessary and valuable component of our national well-being. They should be encouraged, incentivized, and even assisted to make life better for all of us. But not when they do the opposite.