Iraq’s Prime Minister Adel Abdul Mahdi “said earlier on Friday that he had asked Secretary of State Mike Pompeo to send a delegation from the United States to discuss steps for the withdrawal of the approximately 5,200 American troops from his country, in the aftermath of a deadly American military strike ordered by President Trump that many Iraqis say violated their country’s sovereignty….Iraqi lawmakers voted on Sunday to expel United States forces after the American drone strike that killed 10 people in a two-car convoy — Maj. Gen. Qassim Suleimani, a top Iranian commander, four of his Iranian aides and five Iraqis, including a senior militia leader, Abu Mahdi al-Muhandis. The prime minister has not signed the bill yet, but had been criticizing the American troop presence in Iraq since a series of recent actions by the United States military.” [1] 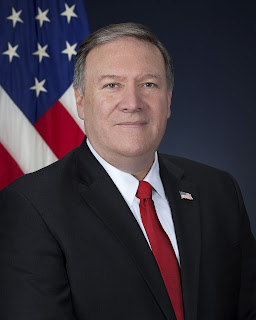 But the United States isn’t having any of it. The New York Times reports that the “State Department…rebuffed the Iraqi government’s request to begin discussions on pulling out troops, saying that any American officials going to Baghdad during a state of heightened tensions would not discuss a ‘troop withdrawal.’ Instead, discussions would be about the ‘appropriate force posture in the Middle East.’” Secretary of State Mike Pompeo said thereafter that the U.S. is “‘happy to continue the conversation with the Iraqis about what the right structure is,’” stressing “that the mission of the United States in Iraq was to train Iraqi forces to fight the Islamic State, and ‘we’re going to continue that mission.’”

It seems that Mr. Pompeo is of the view that the U.S. will “continue that mission” whether the Iraqis want it or not.

That is, quite frankly, alarming. The Secretary of State is saying that American troops will remain in Iraq against the wishes of the Iraqi government. If that situation develops, then the U.S. will become an occupying power. And how would we justify that?

Chapter I, Article 2, paragraph 4 of the United Nations Charter requires that all UN “Members shall refrain in their international relations from the threat or use of force against the territorial integrity or political independence of any state, or in any other manner inconsistent with the Purposes of the United Nations.” [2] Stationing troops in another nation against the will of its government is clearly contrary to that provision.

Our Secretary of State just threatened to make the United States an outlaw nation. How that would serve American interests is difficult to envision.
Posted by Jack Quirk at 12:58 PM