On January 9, 1942, the West Virginia State Board of Education “adopted a resolution…ordering that the salute to the flag become ‘a regular part of the program of activities in the public schools,’ that all teachers and pupils ‘shall be required to participate in the salute honoring the Nation represented by the Flag; provided, however, that refusal to salute the Flag be regarded as an Act of insubordination, and shall be dealt with accordingly.’” [1] What was ultimately required after some modification was “the ‘stiff-arm’ salute, the saluter to keep the right hand raised with palm turned up while the following” was “repeated: ‘I pledge allegiance to the Flag of the United States of America and to the Republic for which it stands; one Nation, indivisible, with liberty and justice for all.’” (The words “under God” were not added to the Pledge of Allegiance until 1954. [2])

Certain Jehovah’s Witnesses “citizens of the United States and of West Virginia, brought suit in the United States District Court for themselves and others similarly situated asking its injunction to restrain enforcement of these laws and regulations against Jehovah’s Witnesses….Their religious beliefs” included, then as now, “a literal version of Exodus, Chapter 20, verses 4 and 5, which says: ‘Thou shalt not make unto thee any graven image, or any likeness of anything that is in heaven above, or that is in the earth beneath, or that is in the water under the earth; thou shalt not bow down thyself to them nor serve them.’ They” considered “that the flag is an ‘image’ within this command. For this reason they” refused “to salute it. Children of this faith” had “been expelled from school and” were “threatened with exclusion for no other cause. Officials” threatened “to send them to reformatories maintained for criminally inclined juveniles. Parents of such children” had “been prosecuted and” were “threatened with prosecutions for causing delinquency.” 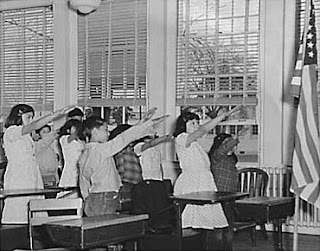 Confronted with these facts, the United States Supreme Court discerned that it was “dealing with a compulsion of students to declare a belief.” The “compulsory flag salute and pledge, it said, required “affirmation of a belief and an attitude of mind.” To sustain such a requirement, the Court said, would have required it “to say that a Bill of Rights which guards the individual’s right to speak his own mind, left it open to public authorities to compel him to utter what is not in his mind.”

It was clear, then, that the requirement of the West Virginia State Board of Education to salute the flag and recite the Pledge of Allegiance could not constitutionally be enforced against the objecting Jehovah’s Witnesses. As the Court put it,

“If there is any fixed star in our constitutional constellation, it is that no official, high or petty, can prescribe what shall be orthodox in politics, nationalism, religion, or other matters of opinion or force citizens to confess by word or act their faith therein. If there are any circumstances which permit an exception, they do not now occur to us.”

All these years later, the lesson still hasn’t sunk in.

On Tuesday [3], the Supreme Court will hear oral arguments in the case of National Institute of Family and Life Advocates v. Harris, which presents the following scenario:

The California Reproductive Freedom, Accountability, Comprehensive Care, and Transparency Act “requires that licensed pregnancy-related clinics disseminate a notice stating the existence of publicly-funded family-planning services, including contraception and abortion.” [4] The National Institute of Family and Life Advocates, and others, object to having to advertise abortion services, which they conscientiously object to. 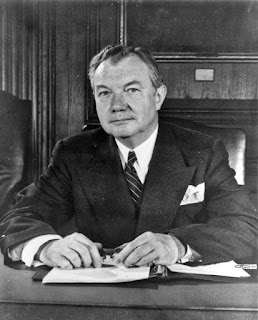 Now since it is a “fixed star in our constitutional constellation,” that “no official, high or petty, can prescribe what shall be orthodox in politics, nationalism, religion, or other matters of opinion or force citizens to confess by word or act their faith therein,” one might expect that their case is pretty solid. Unfortunately, two courts, the federal district court and the Ninth Circuit Court of Appeals, have disagreed.

The reasoning of the Ninth Circuit is that every licensed pregnancy-related clinic is required to give the notice, not just those that are opposed to abortion, and so the requirement should stand. It is as if the Supreme Court had said that West Virginia’s flag saluting requirement had no constitutional defect because everyone, not just Jehovah’s Witnesses, were required to comply with it. Of course, under that reasoning, every regulation of general application would be immune from any sort of constitutional scrutiny.

No one should be compelled to engage in speech that he or she disagrees with. The Supreme Court should strike down the California law in question.
Posted by Jack Quirk at 2:02 PM